- Mezyad castle is situated in the Al Ain region at the foot of Jabal Hafeet. It has been restored so that visitors can get acquainted with one of the largest castles in the region. Its construction dates back to the nineteenth century, but it is not known who built it.

Its rectangular building extends over an area of approximately 2,600 square meters. It is surrounded by tall, cylindrical watchtowers on three corners, which surround a courtyard that contains a palm plantation.

- As reported in Al-Khaleej newspaper on 11/08/2016: Mezyad Castle is an ancient Islamic fortress located south of Al-Ain. The courtyard where the date palm plantation is located is surrounded by more than forty rooms built from the inside with barricades four meters high.

The castle’s large stores contributed to accommodating and providing support to the army, as well as providing shelter for families in the area during times of siege, in addition to being a venue for public meetings. The towers have openings to fire weapons.

The balconies are triangular in shape with regular openings and gaps inserted into the walls, making it one of the largest fortified buildings in the UAE.

_ In an interview conducted with journalist Saif bin Saeed bin Ali Al-Salaf Al-Nuaimi in his home in the Al-Zahir region on 20/09/2016,

he mentioned that the Mezyad Castle was built by the Al-Mezaydeh people who were from Al-Nawasser from the city of Al Ain. He also mentioned that the castle was restored by the late Sheikh Zayed, who was keen to maintain it, it later becoming a police station before a tourist site.

He mentioned that there were two artesian wells in its surroundings, one within the castle, which was used by those in the area, and the other outside the castle, known as the "Fort Well,"  which was used by the Bedouin and the caravans passing through the area. As the outer well fell within the castle after the sheikhs took ownership of the plantation and surrounded all of it with a wall, this well was used to water the trees and plantation crops.

We talked about the region as a vital corridor for commercial caravans from Oman and Saudi Arabia through the UAE. He mentioned that there are two main corridors for convoys that passed through the region, one from the east towards Umm Ghafa and Sa'a, while the other is to the west, known as the "Al-Hiri Trail" at the base of Jabal Hafeet, which leads to Oman, Saudi Arabia, and the UAE.

He also reported that the Mezyad area has been inhabited by people for a long time, as they used to come from the oases area to the mainland in the winter season. Later, Sheikh Zayed built them modern housing.

he reported that in the past, the area and the castle was called "Al-Hasoun" in relation to the three towers that were close to each other. The late Sheikh Zayed restored them and combined them into one castle, calling it “Mezyad Castle.” He also worked to revive the falaj located there in 1968 to make the water flow. This attracted the villagers who flocked to the site to collect the water they needed.

- In an interview with Mr Hamdi Nasr for Al-Dhafrah magazine in 2009 on Mezyad Castle, he said that:

The castle was built entirely from sarooj (water-resistant mortar), stones and wood. Muhammad Amer Al-Niyadi, Director of the Historical Environment Department at the Department of Culture and Heritage - Abu Dhabi, mentioned that the castle was the headquarters for the Mezyad Police for 20 years. Following this, it was handed over to the Department of Antiquities and Tourism in Al Ain in the early eighties. A second maintenance operation was carried out, while currently the third is underway. The castle dates back three centuries. 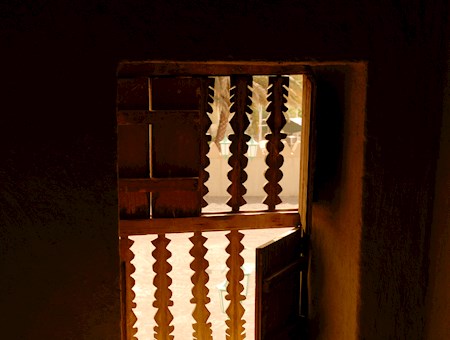 For pearl divers and sailors at sea, a boat could serve as a location for a Majlis, where they would discuss topics such as ships, fishing, diving and hardships at sea. 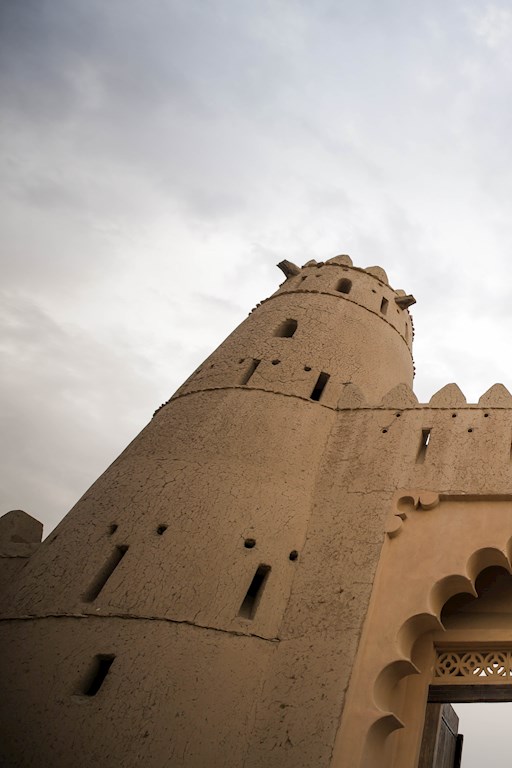