The city of Al Ain was chosen to build this museum due to the numerous and diverse archaeological sites it houses, dating back (5,000) five thousand years. It is the oldest oasis in which man settled and built his civilization. At first, the late Sheikh Zayed bin Sultan Al Nahyan selected the fort of Sheikh Sultan bin Zayed Al Nahyan to be the headquarters of the museum, after he had ordered its restoration in 1969 with the same local materials with which the fort was built, that are naturally available in the environment. Then, the late Sheikh Zayed bin Sultan Al Nahyan ordered the construction of a new building in 1970 that contained only two halls. It was inaugurated in 1971. Two halls were then added in 1975 to accommodate the large number of antiquities that had been discovered in Al Ain.

The purpose of constructing this museum was to:

Preserve the ancient monuments, highlight the aspects of the UAE heritage and civilization, in addition to providing the Emirati people with adequate information about the daily life that their ancestors experienced in the past and spreading the UAE culture globally by providing the visitor a complete and comprehensive idea of the Emirati heritage and culture through brochures containing valuable information about the antiquities in many places in the UAE, as well as through the adequate guidance of the qualified personnel who are keen to achieve these desired goals.

1- The "Ethnographic" Section: It occupies the right side of the museum and forms part of the second hall. This section or wing tells the story of the people of the UAE in the pre-oil era and the stages they went through since its creation. In this section, the visitor notices display cabinets that begin with a display on childhood and education. They witness a model representing a mother as she takes care of her baby in its cradle, or the so-called "manz", which would be covered with a transparent lightweight fabric to protect the child from mosquito and insect bites. Then, in other models, visitors can witness the traditional stages of the beginning of a child's education by the Mutawa and their memorization of the Quranic Surahs. This section also contains some jewellery that were adorned by women. Among these exhibits is the "Maria Theresa Dollar", which is known locally as the French riyal and encloses a stamp dating back to 1780. Women would wear necklaces made of these dollars. In a large cabinet, there is a display of an anthropomorphic bride in her wedding dress, along with her gold jewellery and beauty products. This section also displays traditional agricultural tools, including the manual plow drawn by an ox, and a picture of the process of extracting water from wells by buckets, as well as some tools such as a saw, a drill, a chisel, cutting tools and a number of knives. In another cabinet, there are examples of traditional herbs and medicines, including thyme, black seed, fenugreek, aloe, nutmeg, hulool, gum, alum, and others. In this section, we can observe the weapons wing, in which we see different models of swords, arrows, gears, shields, various rifles, axes and daggers. Then, there is the falconry pavilion where there is a model of a large falcon "shaheen", and another model of a bustard. In an adjacent cabinet, we can view a model of a falconer carrying a falcon on a minqala, and several models of traps used in hunting foxes.

2- The "Archaeology" Section: It includes the third and fourth halls. This section displays the historical monuments of the United Arab Emirates and is a record of the history of the ancient civilizations that flourished on the land of the UAE over thousands of years in a chronological sequence starting from:

A - The Neolithic Age: The period of time between the sixth and fourth millennia BC, where recent research conducted by Professor Hans Peter Urimann and Margaret Uriman from the University of Tübingen in Germany suggests that man had a presence in the Jabal Al Faya area in the Emirate of Sharjah since the days of the ancient Stone Age. The earliest findings also demonstrate the existence of settlements dating back 7,500 years ago. These findings consist of stone tools, stone scrapers and arrowheads.

B - The Bronze Age: Occupies three floors in the exhibition of the Al Ain Museum: the Hafeet period, the Umm al Nar period, and the Wadi Suq period. The Hafeet period discoveries include tombs that appear in the form of piles of stones above the ground, and a display of a group of pottery vessels that were found inside those tombs that date back to the period between 3200 - 2700 BC. In the Hili tombs, located in the Al Ain Museum, two entrances can be seen for each of tombs cemeteries leading to the inner chambers in which the dead were buried. Various types of pottery and a set of decorative tools containing necklaces of agate can be found within the tombs. We can also find antiquities that were discovered on the island of Umm al Nar, including fishing hooks, net stretchers, tools, sewing needles, bronze blades, large quantities of pottery and animal bones. There are also antiquities originating from the Qattara cemetery in Al Ain, the most prominent of which are pendants made of gold in the shape of animals.

C - The Hellenistic Age: It is the era in which the Greek civilization intermingled with Eastern civilizations. We can observe a variety of displays of antiquities from this era such as a green glass vase, pottery dishes, a flask, a dagger and a number of arrows made of iron. In the gifts section, we see a group of gifts received by the late Sheikh Zayed bin Sultan Al Nahyan from kings and heads of brotherly and friendly states, including a valuable collection of Islamic antiquities, comprised of a number of gold and silver coins, ceramic and glass vessels, a model of a boat encrusted with ivory, a model of a large eagle, and a golden figure of a palm tree.

3- The Petroleum Section: This section includes a group of illuminated pictorial slides that illustrate the methods of petroleum formation and refining, as well the products manufactured from raw petroleum. This collection was provided by the Abu Dhabi Oil Company "ADMA" to the Al Ain Museum.

The entity to which it belongs:

Al Ain National Museum belongs to the Department of Culture and Tourism - Abu Dhabi and was built on land spanning 1,200 square meters.

The museum opens its doors to visitors all days of the week from 8 am to 7 pm, except on Friday, when working hours start from 3 pm to 7:30 pm, and Monday when the museum is closed to visitors.

3- In a field interview conducted with Dr. Walid Yasin AlTikriti, the head of the Antiquities Department in the Al Ain National Museum on 22/10/2014 at 11 am in his office at the Al Ain National Museum, he discusses the inauguration of the Al Ain National Museum and mentions that the official opening of the museum was in 1971, but it was founded much earlierin the year 1969. Dr. Walid states that the Qasr Al Hosn in Abu Dhabi enclosed some simple exhibits that were moved, as the AlHosn Museum laterbecame the AlAin Museum. The late Sheikh Zayed bin Sultan Al Nahyan had ordered the construction of the Al Ain Museum.Construction commenced in 1969 and was completed in 1971, with the opening taking place in the same year.

He notes that the museum's development began in a simple way, taking into account the limited individual means. Great efforts were made to preserve the exhibits. Some identification cards were rewritten, and some maps and pictures were preserved. They then worked on providing the museum with new artifacts, rearranging the chronology of the exhibits, and working on the documentation process. Each artifact in the museumwas recorded in a special register, whether in the Antiquities or Heritage Department, and a special number was assigned to each.

4- In a field interview with Mr. Ateeq bin Halees Al Dhaheri and his mother, on 16/10/2014 at 10 am at his home in Al Sarooj Area of Al Ain, they discuss the museum and the history of its establishment.

Mr. Ateeq stated that the museum was established in the early 1970s. Mr. Ateeq’s mother recalls that citizens cooperated in collecting heritage artifacts for the museum. For example, women who had burqas decorated with silver or golden letters, or various types of silver, golden or beaded marasigh, would provide them to the museum. Some also provided old antique utensils, and other types of tools used in extracting water from wells (tawy) such as yazra tools etc. The people would receive compensation for providing these objects. Mr. Ateeq notes that he visited the museum with his fellow students at the Nahyaniya School in 1972 and was able to closely observe all of its archaeological contents.

He adds that the museum started small, and gradually expanded in the 1970s. Before the museum was built, the yard on which the museum is located was devoid of buildings. It contained only one large cannon which was used on festive occasions and celebrations, as well as a well allocated to horses. The old external mud wall had begun to crack, so it was demolished, and a large concrete wall was built instead over a wider area, which is currently located along the castle and the museum.

The museum restoration and development project, which is supervised by the Department of Culture and Tourism - Abu Dhabi, will continue until the final quarter of 2020. The project aims to enhance the cultural standing of this ancient historical edifice, to develop its research capabilities, to maintain and preserve the antiquities, and to take advantage of the latest available technologies to improve the style in which the collections are displayed collections in a manner befitting its position as a cultural beacon for future generations. 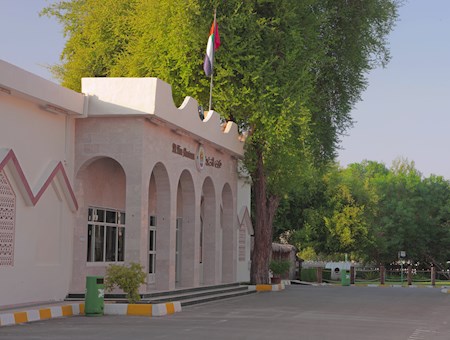 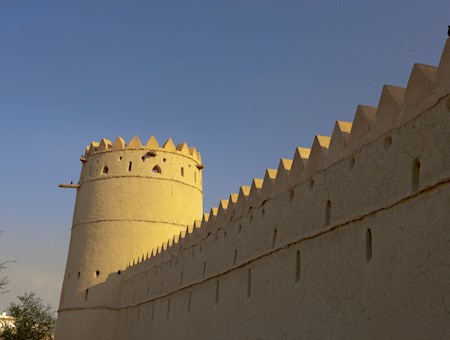 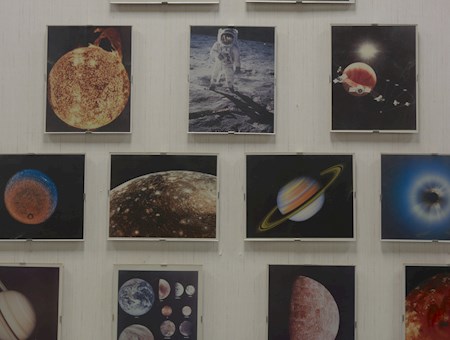 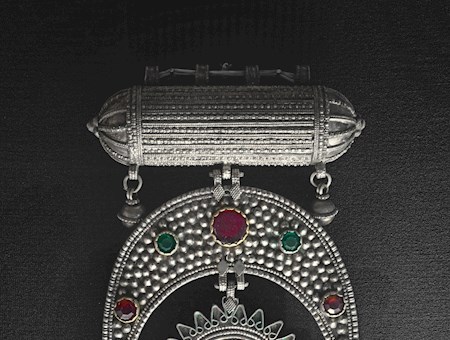 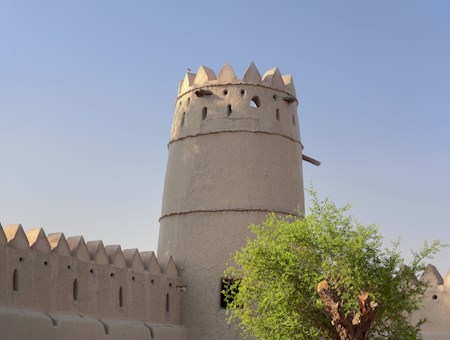