LISTEN TO THIS PAGE
Wahat Al Karama is a permanent tribute to UAE’s brave soldiers and other Emiratis who made the ultimate sacrifice while serving the Nation.
Wahat Al Karama is a place where citizens, residents and visitors to the UAE can pay homage to those who selflessly gave their life to a cause greater than themselves. They will continue to inspire us, and we will keep their memories alive through this memorial. “Wahat Al Karama” literally means “the oasis of dignity” – a fitting title for the site chosen to immortalise the names of the men who gave their lives for the UAE, as directed by H.H. Sheikh Khalifa bin Zayed Al Nahyan, President of the UAE.

The Memorial itself comprises 31 massive aluminium-clad tablets, each leaning on the other, symbolising the unity, solidarity and mutual support that bind together leadership and citizens with the servicemen and women who protect them. The long spine at the rear of the Memorial is engraved with the Pledge of Allegiance of the UAE Armed Forces and symbolically supports the other panels.
The tablets, which are formed from over 1,000 cast aluminium panels, are inscribed with a series of poems and quotations by the UAE’s Founding Father, His Highness the late Sheikh Zayed bin Sultan Al Nahyan; HH Sheikh Khalifa Bin Zayed Al Nahyan, the President of the UAE; HH Sheikh Mohammed Bin Rashid Al Maktoum, Vice President and Prime Minister of the UAE and Ruler of Dubai; and HH Sheikh Mohammed Bin Zayed Al Nahyan, the Crown Prince of Abu Dhabi and Deputy Supreme Commander of UAE Armed Forces.

The Pavilion of Honour

Located at the end of the visitor’s journey and reached on a downward journey from the Memorial, the Pavilion of Honour appears from the outside as a solid, polygon structure embedded in the earth. The Pavilion’s circular internal wall is clad with over 2,800 aluminium plates, among which are inscribed the names of the UAE’s heroes. Each of the illuminated plates are engraved with the hero’s name, rank, service branch, location, and date of death. They are made from aluminium reclaimed from armoured vehicles used in service with the UAE Armed Forces.
The roof is constructed from eight slabs – seven symbolise the emirates of the UAE, while the eighth represents the UAE’s heroes. At the centre of the Pavilion is a composition of seven large, transparent glass panels, representing the seven emirates, surrounded by a pool of slowly-moving water. On the front and back of each panel is the Pledge of Allegiance of the UAE Armed Forces, legible from whichever side the visitor reads it.
Two passages from the Qur’an are inscribed in the Pavilion of Honor: at the entrance and along the top of the inside wall.

At more than 4,000 square metres, the Memorial Plaza is a wide, circular space, offering clear views of the Memorial and the Sheikh Zayed Grand Mosque. It is clad with travertine stone from Turkey and surrounded by a terraced amphitheatre that comfortably accommodates 1,200 people. A large circular pool of water occupies the centre of the plaza, which, at 15mm deep, is shallow enough to easily walk across. The pool provides a unique reflection of the Mosque and also the Memorial panels.

The Visitors’ Center is the main point of welcome for visitors to “Wahat Al Karama”. It will ultimately house an interactive visitor experience that tells the story of the Memorial and the UAE’s Heroes. The Visitor Center roof is accessible to the public and provides clear views of the site, the Sheikh Zayed Grand Mosque and the Sheikh Zayed Bridge beyond.
For more information on wahat al karama click here. 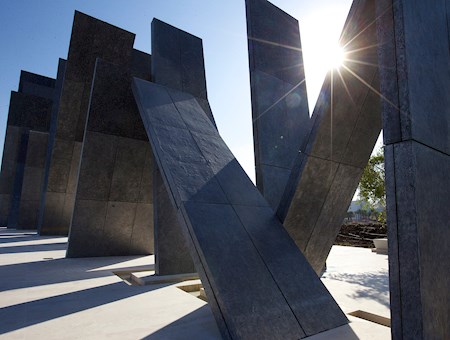 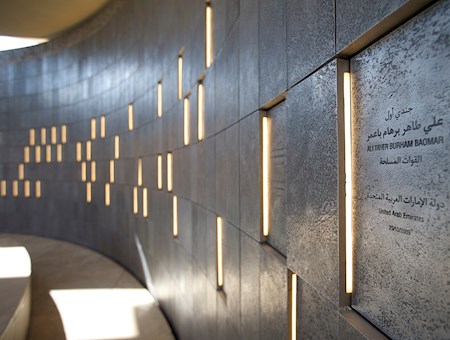 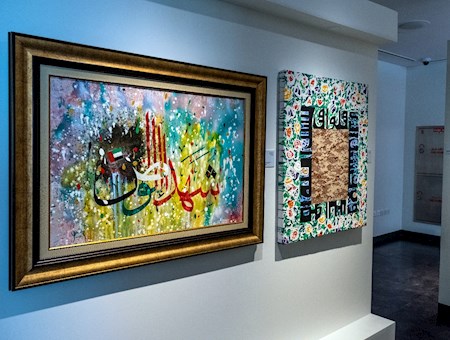 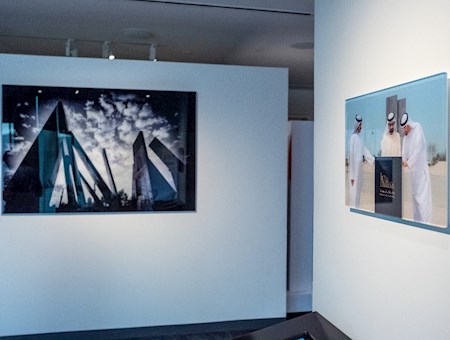