LISTEN TO THIS PAGE
Fast and clever, the Saluki has been a hunting and guard dog for desert people in the Arabian Peninsula for 5,000 years
Ever since its domestication more than 5,000 years ago, the Saluki dog has been a companion to desert people in the Arabian Peninsula. Indigenous to the region, the dog’s speed, intelligence and loyalty have made the Saluki much beloved by Bedouin, who have used the dogs for hunting and guarding, among other services in daily life.

The breed’s name comes either from the city of Saluk in the Hadramout region of Yemen, where the dog may have first been domesticated, or from the ‘Bani Saluk’ tribe in Yemen that may have been the first tribe to domesticate the breed.

Saluki dogs can run extremely fast, reaching speeds of up to 75 kilometres per hour, and can maintain these speeds over extended distances of up to three miles. Full-grown Salukis weigh approximately 26 kilograms and are characterised as long-and narrow-bodied, high-browed, and flat-and high-chested. They have a rectangular-shaped mouth and ears that are long and wide. There are two types of Arabian Saluki hunting dog: ‘Al Hoss’ and ‘Aryash. Al Hoss dogs have light-coloured hair across their entire bodies, while Aryash dogs are characterised by their thick coats.

The speed and stamina of Saluki dogs makes them excellent hunting dogs and exciting animals for racing.
Hunting dogs are often used as part of falconry hunting. Saluki dogs that will join these hunting parties are raised from pups in contact with falcons, in order to train them to work together during a hunt.
Salukis are important during these hunts because they are able to retrieve prey that has been wounded by the falcon but has hidden amidst bushes, tall grasses or other thickets. Similarly, falcons and Salukis work together to catch prey that may be hiding. The bird locates the prey from the air, showing the Saluki where to go to catch it.
Practiced in the Arabian Peninsula for hundreds of years, Saluki dog racing continues today, with the dog’s tremendous speed creating exciting entertainment. Races are held during heritage festivals and other sport and heritage club events.

Established in 2001 in Abu Dhabi, the Arabian Saluki Centre provides resources to Saluki owners, including medical care, training, breeding, animal registration and boarding.
The centre organises the annual Arabian Saluki Beauty Competition, a dog show that differs from Western competitions by its focus not on appearance, but on a dog’s character, intelligence, and skills in areas such as hunting and guarding. 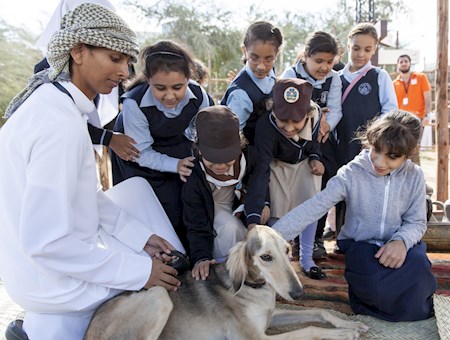 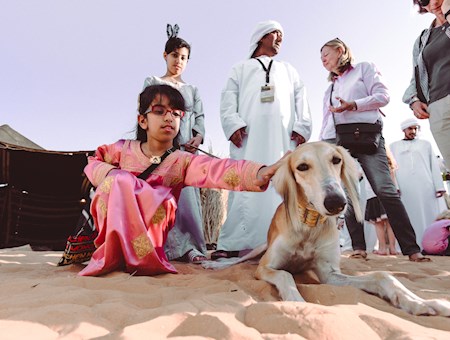 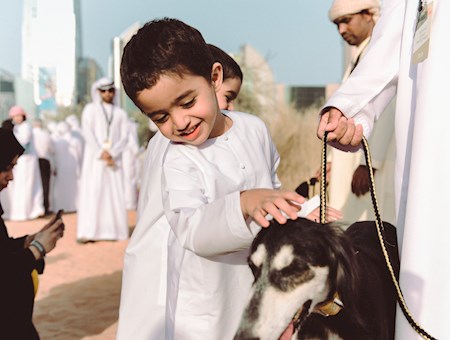 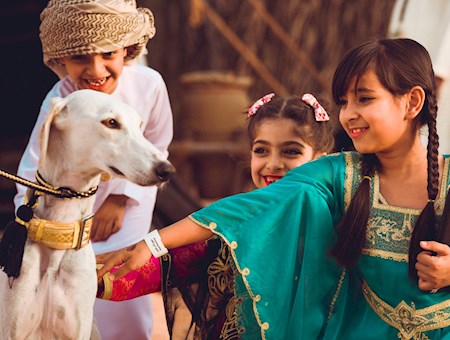 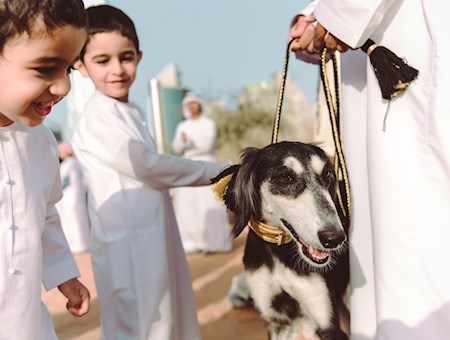 The Saluki breed belongs to the class of dogs called Greyhounds.