LISTEN TO THIS PAGE
Coffee is integral to Arab hospitality, and the traditions associated with it are authentic to the region’s heritage
Serving Arabic coffee to guests is an important element of hospitality in Arab and Emirati society and a symbolic act of generosity. Arabic coffee (pronounced “gahwa” in the Emirati Arabic dialect) has been a central part of Arab culture for centuries and is preparation and serving is marked by elaborate traditions and rituals. In the past, Bedouins brewed their coffee over a rudimentary fireplace dug into the ground. Over time, this was replaced by the kuwar, a clay pit with a stove made from pebbles and stone plates. In houses or tents, the kuwar sits in a nook of the Majlis, and beside it a firewood container and a place for the person preparing the coffee.
The process of converting beans into coffee comprises several steps, including sorting, washing, drying and roasting the beans until they turn red or brown. The roasted beans are ground and brewed to produce an intensely flavoured, aromatic coffee.

Coffee-making tools are collectively called the Ma`ameel (brew basket), and include specialised equipment, chiefly al tawa (a wide circular pan for roasting coffee beans), al mihmas (a spoon for stirring beans), and an iron clamp to place and spread embers inside the stove.
The dallah is an important utensil in the coffee-making process. Specially designed and decorated, three types of dallahs are used in preparing and serving Arabic coffee: dallat al khamrah (a large pot for boiling coffee and cardamom), dallat al talgeemah (a medium-sized pot for filtering the coffee) and dallat al mazalah (a small pot from which the coffee is served).

The serving of Arabic coffee is guided by elaborate etiquette for the server, the guest and the host. For example, the server must hold the dallah with the left hand, with the thumb pointing to the top, and hold the cup with the right hand. Likewise, etiquette for a guest dictates they must use the right hand to receive and return the cup to the server.
The most important or oldest guest is served first, and the cup is only filled one-quarter full. It can then be refilled. Common practice is to drink at least one cup but not exceed three. Arabic coffee is made and enjoyed by men and women from all segments of society, particularly in the home.

Arabic coffee symbolises the generosity and hospitality so highly valued in Emirati society to the extent that it is firmly ingrained in Emirati tradition.
Reflecting the cultural importance of this beverage, the UAE, Saudi Arabia, Sultanate of Oman and Qatar had Arabic coffee inscribed in 2015 on the UNESCO ‘Representative List of the Intangible Cultural Heritage of Humanity’. 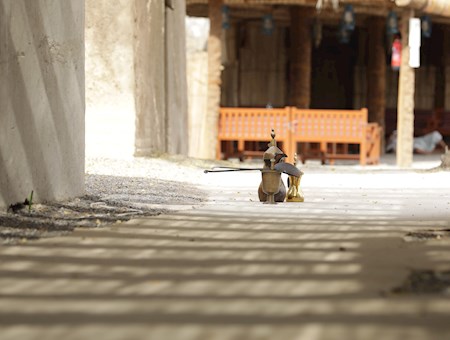 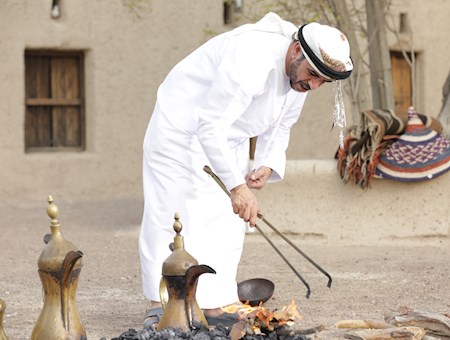 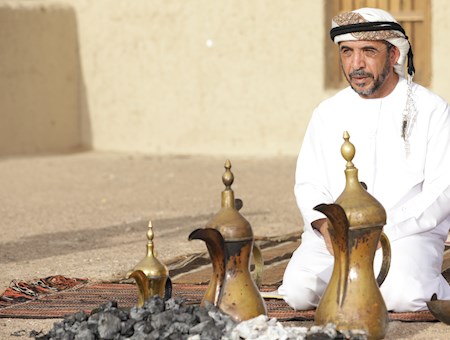 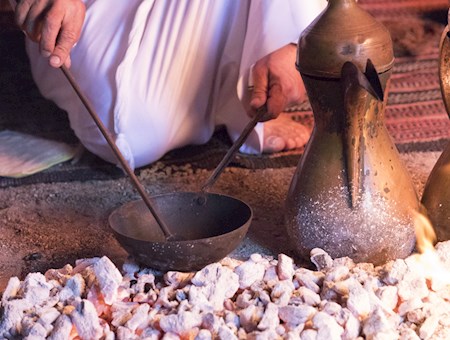 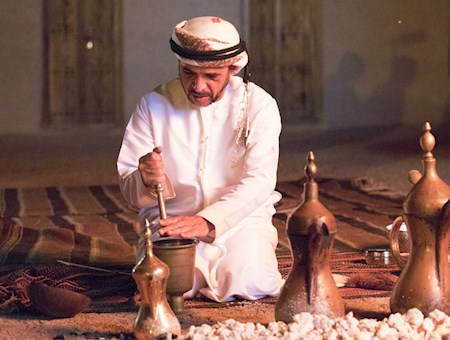 In Arab culture, it is said that welcoming and honouring a guest is incomplete without serving coffee, even if a banquet is being thrown in that guest’s honour. Arabic coffee in the United Arab Emirates is, as in other Gulf and Arab countries, considered a symbol of the generosity attributed to the citizens of the UAE