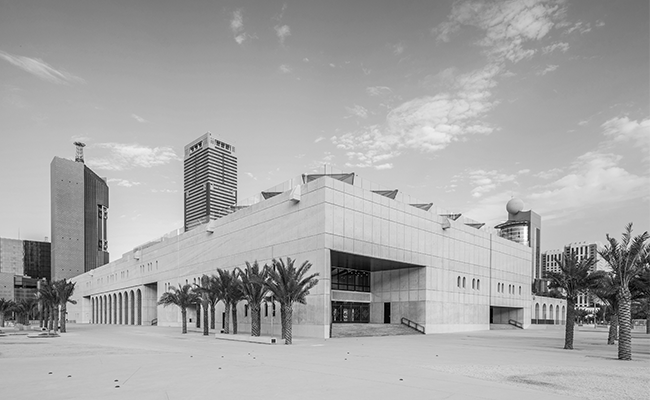 Abu Dhabi’s modern heritage, whether monuments, buildings or neighbourhoods, is a result of the collective experience that narrates the emirate’s transformation from the 1960s to the present day.

#CulturAllExplore | Completed in 1980 during the emirate’s burgeoning economic development, this building is the historic, cultural and economic symbol of the Abu Dhabi Chamber of Commerce & Industry. The institution had an independent role but played an important part in establishing Abu Dhabi as the capital of the United Arab Emirates. Designed in a local modernist style by the French company Seri Renault Engineering, this modern heritage landmark witnessed the development of the waterfront and the city.

#CulturAllExplore | A landmark and emotional centre of the city, the Cultural Foundation building was designed by the Architects’ Collaborative, under the supervision of the late Sheikh Zayed bin Sultan Al Nahyan, Founding Father of the UAE. An exemplary fusion of Modern and Islamic design philosophies, it was completed in 1982 and was one of the main cultural achievements of the early United Arab Emirates. The building forms an important component of Abu Dhabi’s living memory and i a fundamental stepping stone to the emirate’s cultural programmes.

#CulturAllExplore | Designed by Egyptian architect Farouq El Gohary, Saeed Al Kalili Building is considered an Abu Dhabi architectural masterpiece. Colloquially known as Al Ibrahimi Building, this landmark tower is among the few surviving examples of residential buildings that embody Abu Dhabi’s 1980s modernist aspirations. A major landmark in the city’s collective memory as well as a famous structure of the Emirates, it is a historical testimony to an important phase of urban growth in the city and of the changing Abu Dhabi skyline.

#CulturAllExplore | From 1965, the old water tank was a vital part of Abu Dhabi’s infrastructure. Coined ‘Niqah (local dialect for ‘sand mound’) Bin Ateej’ and built along the ridge on the southern edge of Khalidiya, the tank collected fresh water that was supplied from Al Ain and redistributed it to the town. Today, this unpretentious structure and its tranquil surroundings symbolise the historic development of the city and its infrastructure, a once-forgotten structure now a modern heritage urban landmark.

#CulturAllExplore | Part of Abu Dhabi’s second wave of urban development (197888), the Fish Market is a main hub of Abu Dhabi’s historic modern port, Mina Zayed. As the first central fish market in the capital, it generated a microcosm of maritime trade and industry that also attracted other market activities. The Fish Market is considered part of the city’s modern heritage as it is a key historic public facility and helps us to understand the fishing industry in the context of the development of Mina Zayed and the emirate.

#CulturAllExplore | A well preserved, fine example of the earliest typologies of urban residential buildings, Al Otaiba Residencestands witness to the development of Abu Dhabi’s Central Business District from 1972 onwards. Designed by Egyptian architect Galal Momen, this modern heritage building is an example of the Modernist style favoured in the early days of the urban planning of Abu Dhabi as a modern Arab capital city. It was also referenced by Sir Norman Foster in the design for the World Trade Centre.

#CulturAllExplore | Built in 1968, Sheikh Zayed Bin Sultan II Mosque served as the first Grand Mosque of Abu Dhabi, with a capacity of 10,000 worshippers and a central position in the heart of the Central Business District of the new Abu Dhabi City. As one of the first commissioned large-scale community facilities, the building highlighted Islam as one of the primary pillars of Emirati identity. Designed by Hisham Al Husseini and Zaki Humsi, it is one of the oldest surviving examples of the early post-oil buildings in Abu Dhabi. Its architecture exemplifies the late transition architectural period, in which traditional and vernacular elements were constructed with modern materials and techniques.

#CulturAllExplore | Dolphin Park’s design and its social and commemorative values have established it as a landmark in the city’s modern heritage. The park is one of the early 1990s public parks, stretching along Sheikh Zayed Road (formerly Al Salam Street) across from Mangrove National Park. It is the only urban park along the Eastern Corniche and is the only surviving landscape component of the original Qurm Corniche boardwalk.

#CulturAllExplore | A traditional grocery souq built in 1985, the Madinat Zayed Market is one of the last of its kind in Abu Dhabi. Designed by Spectrum Engineering, it has an innovative and unique design that incorporates abstract modern elements into Islamic aesthetics. Despite its humble function, its social and economic importance to Al Danah District and its architectural complexity have earned it the status of a modern heritage gem in the capital.

#CulturAllExplore | Designed in the late 1970s by Henri Colboc, Pierre Dalidet and George Philippe, Zayed Sports City was one of the first examples of monumental masterplans in the United Arab Emirates. Conceived as a garden city covering 110 hectares (271 acres), Zayed Sports City included Zayed Sports City Stadium, an ice skating rink and the Khalifa International Bowling Centre, each illustrating principles of western and regional Modernism. Zayed Sports City is an urban masterpiece of Abu Dhabi’s nation-building phase and also represents a desire to nurture well-being in the community.

#CulturAllExplore | Designed by Galal Momen, the Islamic Institute in Al Ain is an outstanding modern heritage building, its architectural and aesthetics values a complex blend of modern planning and Arab-Islamic design principles. The campus itself is historically, socially and politically significant as the first purpose-built facility for higher education in the United Arab Emirates.

#CulturAllExplore | The Abu Dhabi Bus Station was a key achievement in reinforcing the city’s status as the capital of the United Arab Emirates. It links the city to the rest of the emirate, the federation and region via public transport. Designed by Bulgar and Tayeb and completed in 1989, the highly efficient functional planning of space combined with innovative Modern design aesthetics have made this site a famous example of local architecture across the region.